The dynamic squat exercise, in all its variations, is an integral part of strength and conditioning programs for many health and performance pursuits, especially strength-power and endurance based sports. The movement strengthens the hip, thigh, shank, and back musculature. That’s a lot of musculature! Also, due to being a closed kinetic chain exercise, it is commonly and effectively used in rehabilitation settings (4).

A common recommendation from well-intentioned trainers and coaches is to limit the forward translation of the knees during the squat. “Don’t let your knees go past your toes”, is the oft-heard cue. Does this recommendation minimise stress on the knee? How does it affect adjacent joints?

Professor Andrew Fry and colleagues answered these questions in a classic study back in 2003 (2). The researchers had seven recreationally weight-trained men perform high bar parallel back squats with either a restriction on anterior movement of the knees, or unrestricted forward movement of the knees. Joint torques were determined at both the knee and hip for both squat techniques.

The primary finding of the study was that significantly greater torque was produced at the hips and significantly less torque was produced at the knee in the restricted squat. In fact, while there was a 22% reduction in knee torque, there was a 1000% increase in hip torque. The authors of the study state that these hip forces will ultimately be transferred through the lower back. 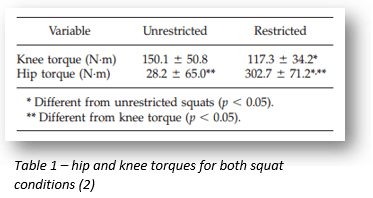 This increased hip torque is due to an increased moment arm at the hip in the restricted squat, resulting from the greater forward trunk lean. The forward trunk lean has to occur in order to keep the system centre of mass within the base of support, since the more upright shank pushes the hips back, the torso must come forward. The method of restricting the forward motion of the knee in this study is shown in figure 1, however this same limited forward shank angle is seen in individuals with inadequate ankle dorsiflexion.

It has been shown that lumbar shear forces increase with greater forward lean of the torso (3), thus it becomes a trade-off between optimal positioning at the knee and hip. Of course we want to limit undue shearing forces at the knee, but we must also consider how this affects other joints, most notably the hip and low back.

You can cue an individual squatting with limited ankle dorsiflexion to “remain upright”, “keep the chest up” all day long. They simply cannot do it because if they did, they would fall backwards. You can’t cheat physics. Elevate their heels however, and watch them magically perform a beautiful upright squat. You essentially just gave them greater ankle dorsiflexion range of motion.

Therefore, in order to optimise the forces at all involved joints, it may be advantageous to permit the knees to move forward, past the toes when performing the barbell squat. Although there may be slightly increased shearing forces at the knee, these forces are well below the tolerable capacity of the structures in a healthy knee (1).

About the Author: Jon Easdown

Get “The Unfair Advantage”